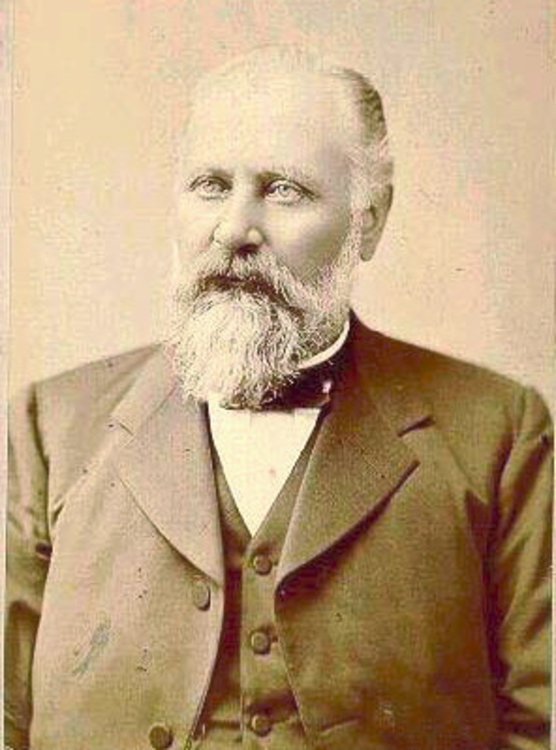 Claus Spreckels was born in Lamstedt, Hanover, Germany, the Eldest son of John Diedrich Spreckles.  He emigrated to America in 1846 at age 18, with only three dollars in his pocket.  He settled in Charleston, South Carolina and obtained a position in a grocery store.  In a few years he had purchased the store.

Anna Christina Mangels was Spreckles' childhood friend.  She and her brother had emigrated to New York City during the political purges in Germany in 1849.  In an era when steamship passage between Charleston and New York took 60 hours, Claus and Anna began a long-distance courtship.  They were married in the spring of 1852.  In October of 1852 Claus was denied a Tavern License from the city of Charleston for serving alcohol to "Negroes".

America was dividing along the Mason-Dixon line, but Spreckles' ties to the North were growing stronger.  Over the next few years he traveled there several times for business.  In 1855 he finally sold his Charleston grocery store and moved to New York City and opened another.

Later that year Spreckles' brother Bartold arrived from San Francisco and told of his and their brother Peter's adventures in the Gold Rush.  Claus, sensing money for the taking, decided then and there to move. He arrived in San Francisco in the spring 1856, having traveled the five-month journey around the horn of South America with his wife and two infant children.

Upon arrival in San Francisco Spreckles opened a small provisions shop. Two years later, in 1858, he founded the Albany Brewery on Everett Street.  In 1860, his 18-year-old brother Henry arrived from Germany and was put to work as a driver.  Claus ran the brewery for seven years, selling his beer through his brother Peter's sample room, the Town Talk Saloon.  In 1867 Claus and Peter left the Albany to form the California Sugar Refinery.  Henry, with junior partners Claus Mangels, Claus Brommer and Frederick Hagemann, took control of the brewery.

Henry guided the brewery ably for the better part of the next decade.  He added partner Diedrich Brommer in 1876.  Then in September of 1877 Henry died of a heart attack at the age of 35, and the junior partnershad to take control.  The new manager the Albany was Frederick Hagemann.  He and Claus Mangels were also on the board of the California Sugar Refinery, and they worked with Claus Spreckles to tie up Henry's estate.  By 1880 estate was settled and the Spreckles family was officially out of the brewery business.  Claus Spreckles and his brother Peter concentrated on the California Sugar Refinery.

The Albany Brewery's name was changed to the Hagemann Brewing Company.  It was operated by the Hagemann family for another 40 years before it was closed down by Prohibition in 1920.  It never reopened.

Claus Spreckles died at the age of 80 on the day after Christmas, 1908.  His and Peter's efforts in the sugar business paid off.  Claus was hailed upon his passing as the Sugar King of the Pacific Coast.   He would eventually be recognized as one of the most successful German immigrants in 19th century America.  His estate is estimated (in 2020 dollars) to have been $26 billion. 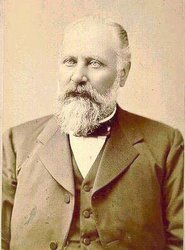 Claus Spreckels was born in Lamstedt, Hanover, Germany, the Eldest son of John Diedrich Spreckles.  He emigrated to America in 1846 at age 18, with only three dollars in his pocket.&... View More 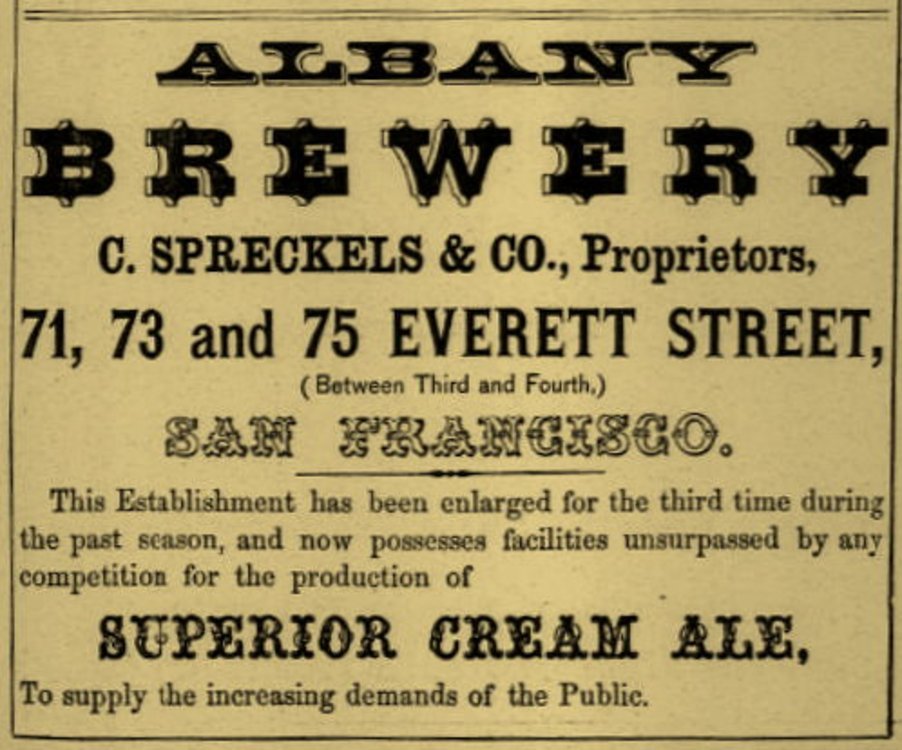 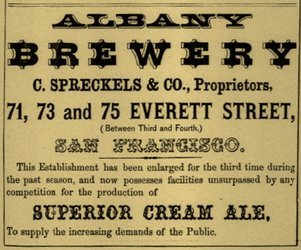 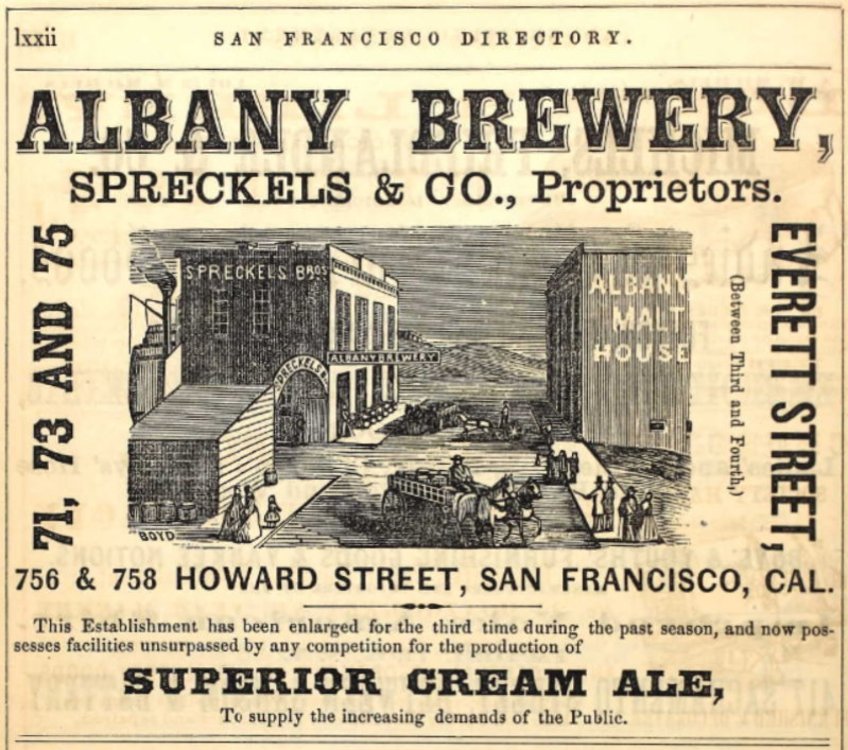 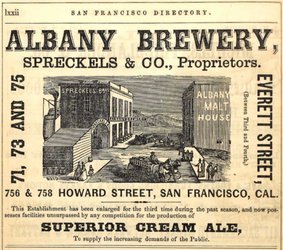 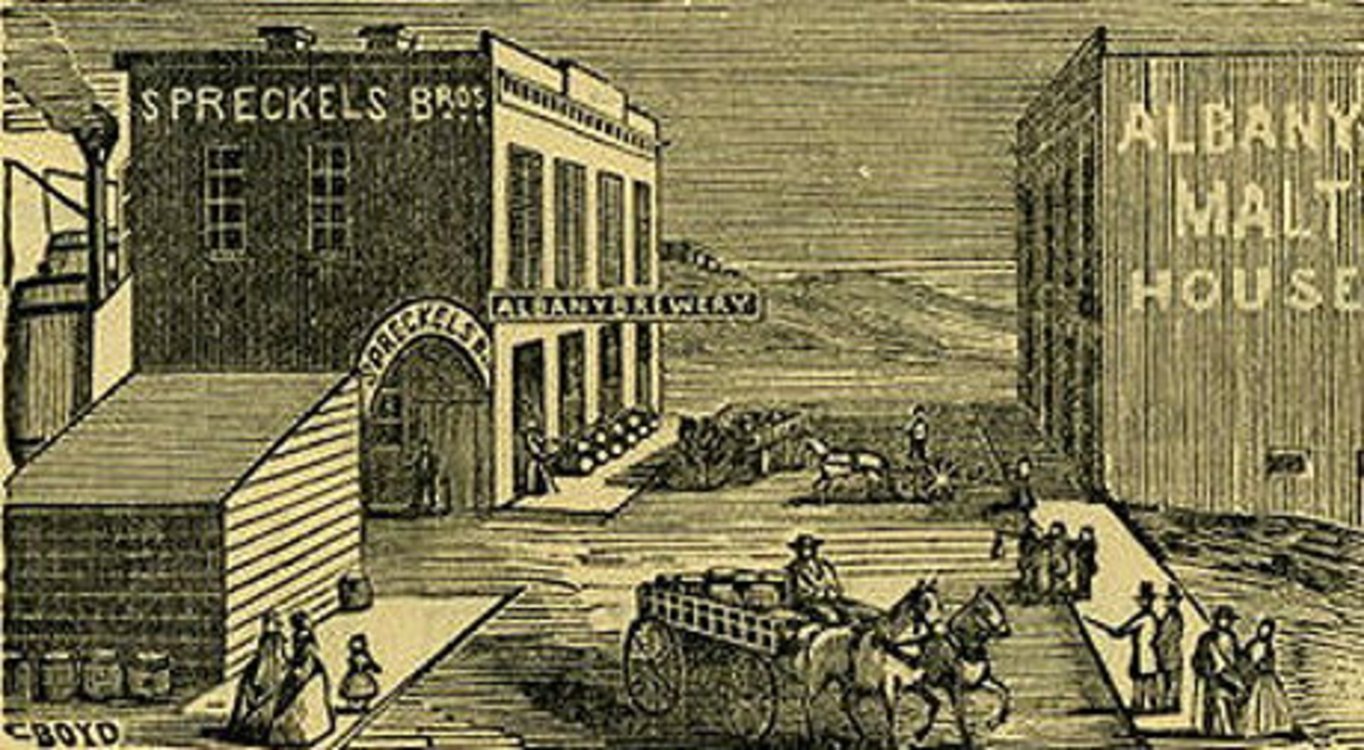 The malt house of the Albany Brewery. 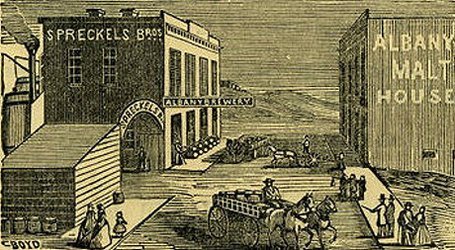 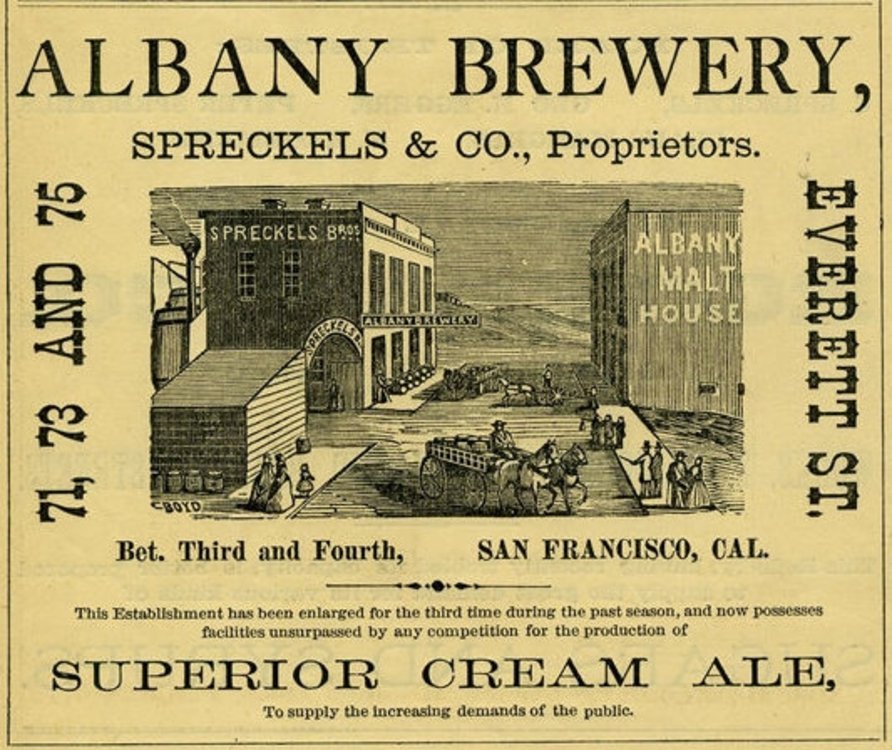 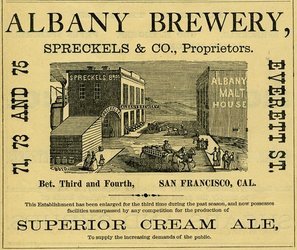 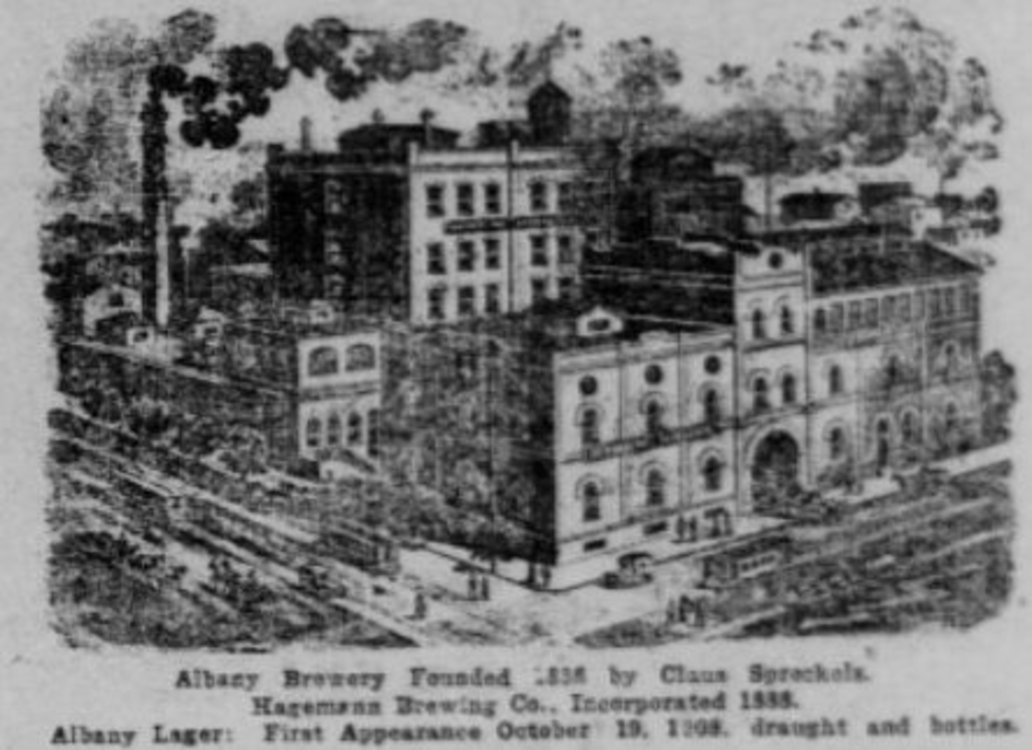 An early vignette of the brewery. 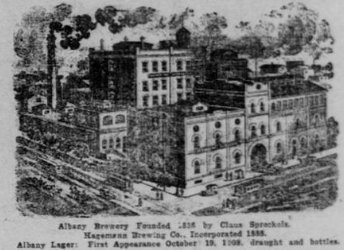 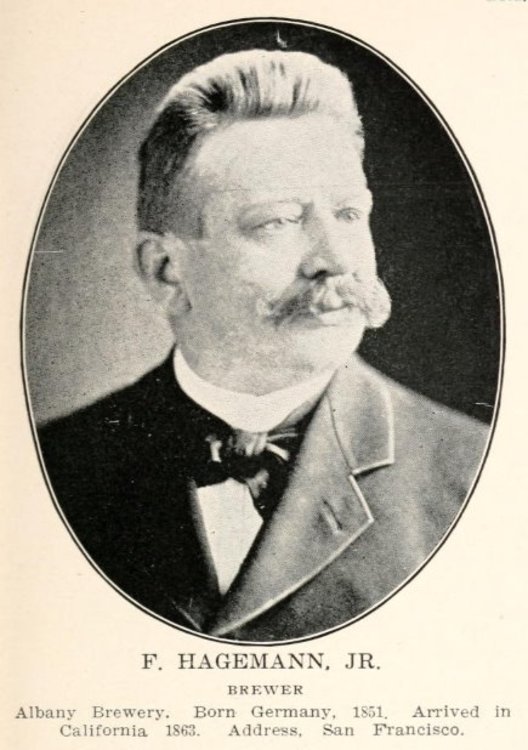 Fred Hagemann Jr. Brewer for the Albany Brewing Co. From the 1903 book Men of the Pacific coast, by Pacific Art Company. 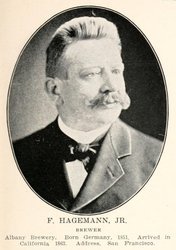 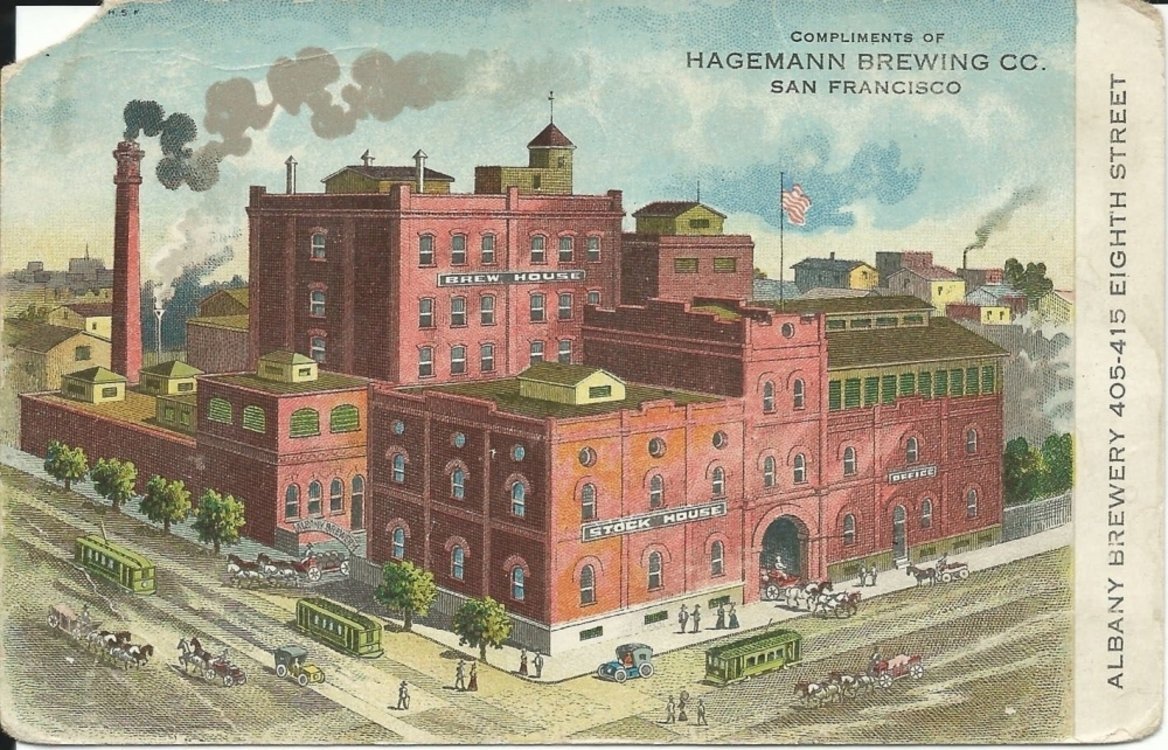 The Hageman Brewing Co., Albany Brewery at its last address. 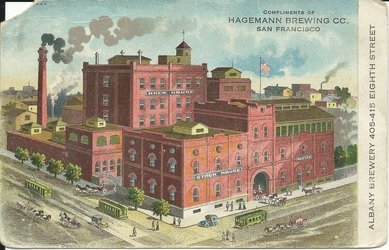 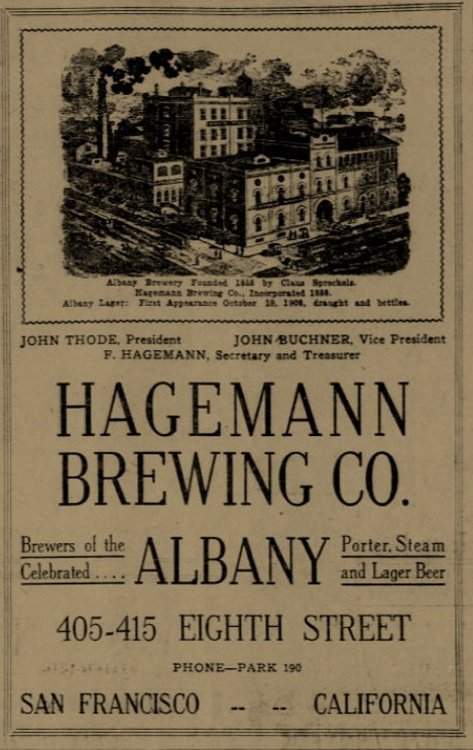 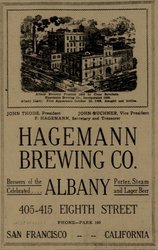 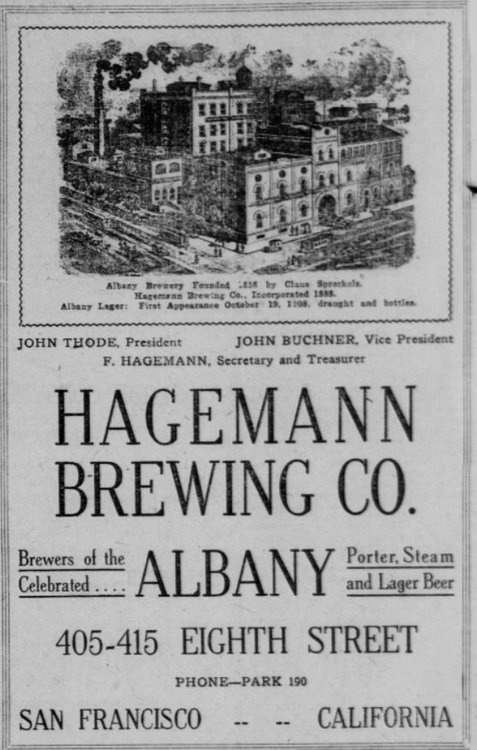 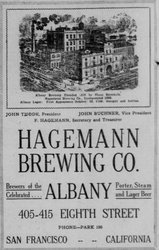