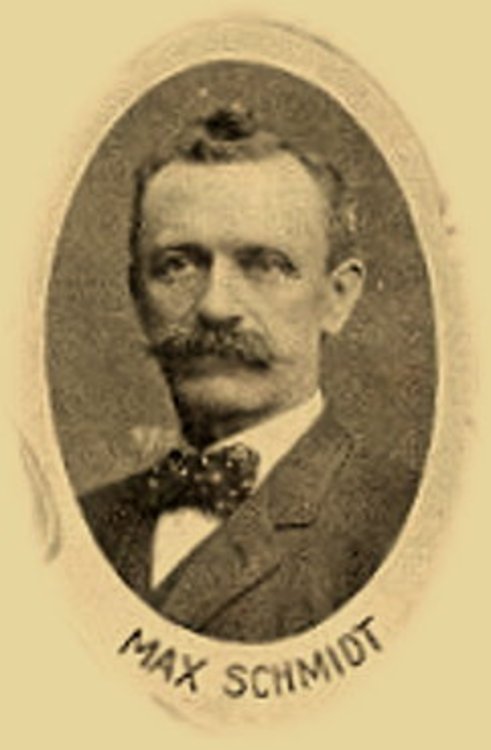 Max P. Schmidt was born in Schlawe, Prussia. He emigrated to America at age 19 in 1877. He first located in New York City, but later settled in Shenandoah, in the mountains of Pennsylvania. There he and his brother Frank started a dry goods business which together they operated for nearly twenty years. Through this store the brothers became well-known, popular and wealthy.

In 1896 Max cashed out of the company and purchased a minority stake in P. H. Fuhrmann's Eagle Run Brewery in Coal Township, just outside of Shamokin. The brewery had been saddled with debt after being completely rebuilt the year before. The investment turned out to be a wise one. The Fuhrman & Schmidt brewery would continue to expand, so much so that in 1916 the partners had to erect a new brewery in the town of Shamokin in order to satisfy the demand for their beer. The firm would go on to be one of the largest such concerns in that part of the state. The brewery operated until Prohibition came into effect in 1920. Max Schmidt died on the 18th of November, 1945. He was 86 years of age. 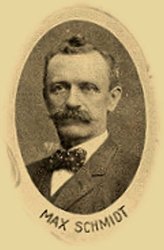 Max P. Schmidt was born in Schlawe, Prussia. He emigrated to America at age 19 in 1877. He first located in New York City, but later settled in Shenandoah, in the mountains of Pennsylvania. There h... View More 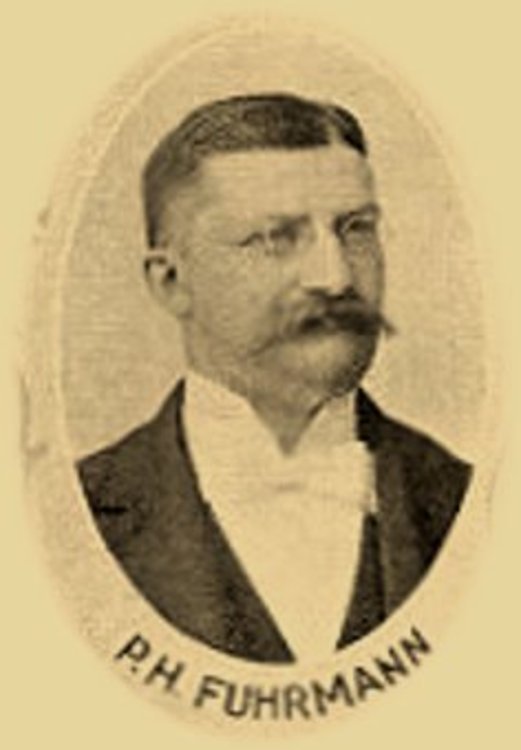 Phillip Henry Fuhrmann was born in Frankenthal, Rhenish Bavaria. He was an excellent student and he was soon hired by one of the largest machine factories in Germany.  Fuhrmann's skills did not disappoint his new employer.  They advanced him to private secretary to the general manager while Fuhrmann was still a teenager. Through this experience Fuhrmann gained a solid business education and acquired an excellent knowledge of machinery.

In the early 1880s Fuhrmann emigrated to America and took a home (perhaps with friends or relatives since he was still not yet twenty) in DuBois, Pennsylvania. There he found work selling Kaier's Beer and Whiskey to thirsty loggers.

Philip Fuhrmann must have impressed Kaier greatly because in 1884 (at age 21) he was offered a position as his assistant manager in Kaier's manufactory in Mahanoy City. The next seven years saw great expansion in the Kaier Company, for which Mr. Fuhrmann was largely credited. Subsequently in 1891 he was rewarded with a partnership in the firm.

However in 1895 Fuhrmann and Kaier had a falling out. Fuhrman had returned from vacationing in Germany to find the brewhouse had been "mismanaged". Fuhrman sued the company and Kaier settled by buying out Fuhrmann's partnership and outstanding stock.

Fuhrmann left Mahanoy City and moved 40 miles west to Coal Township where he had a stake in Martin Markle's Eagle Run Brewery. On March 2nd, 1895 Fuhrmann purchased the brewery outright. The brewery was a small, wood-frame structure and, true to character, Fuhrmann pushed it to its limits. Or, more accurately, past its limits, as during the summer of 1895 the refrigerating machinery failed and the building literally collapsed around it.

Fuhrmann's character, however, had another quality: Tenacity. Within a year he rebuilt a new, modern brewery and had cultivated enough business that it needed to be run at full capacity. It was possibly this crisis that necessitated a new investor as the next year Max Schmidt joined the firm as partner. The Fuhrmann & Schmidt brewery continued to thrive until Prohibition, then it returned after repeal to operate until 1975. 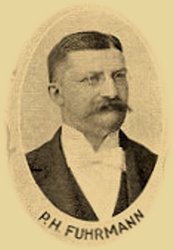 Phillip Henry Fuhrmann was born in Frankenthal, Rhenish Bavaria. He was an excellent student and he was soon hired by one of the largest machine factories in Germany.  Fuhrmann's skills di... View More 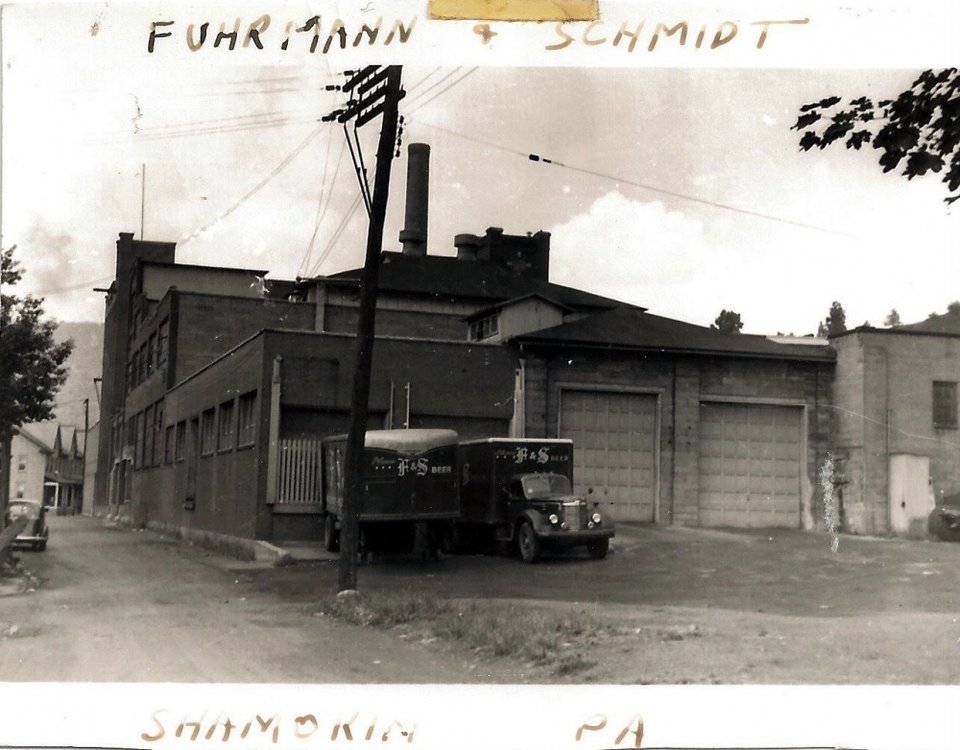 The Fuhrman & Schmidt brewery as it looked in the years after WWII. 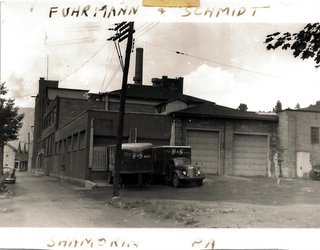 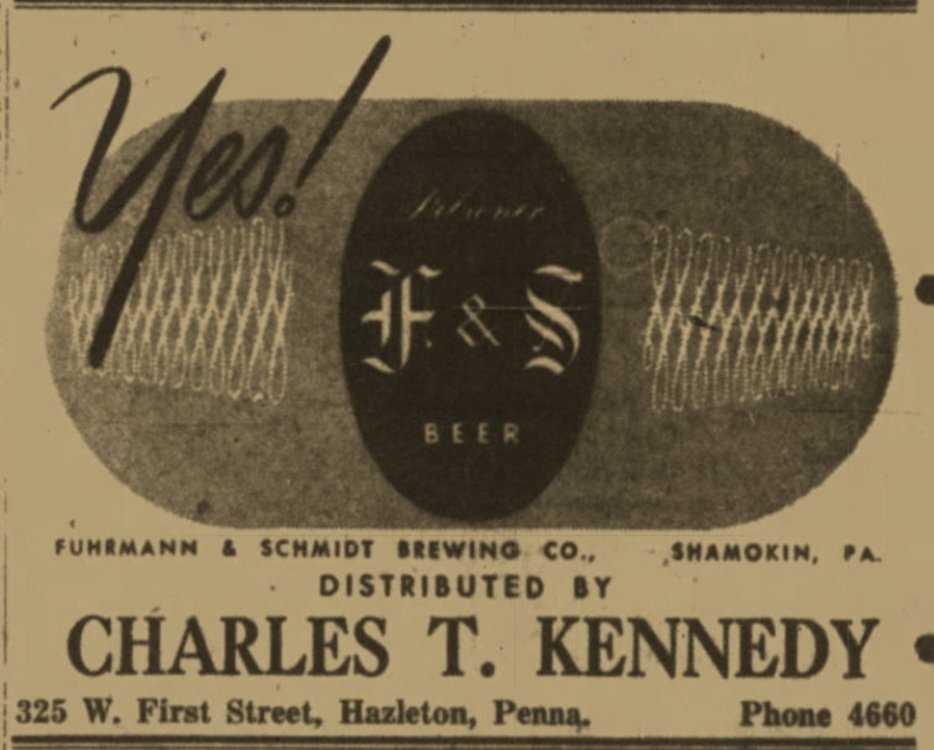 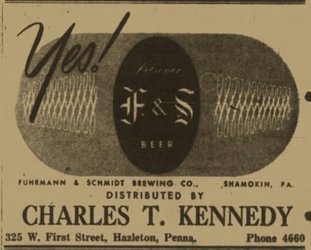 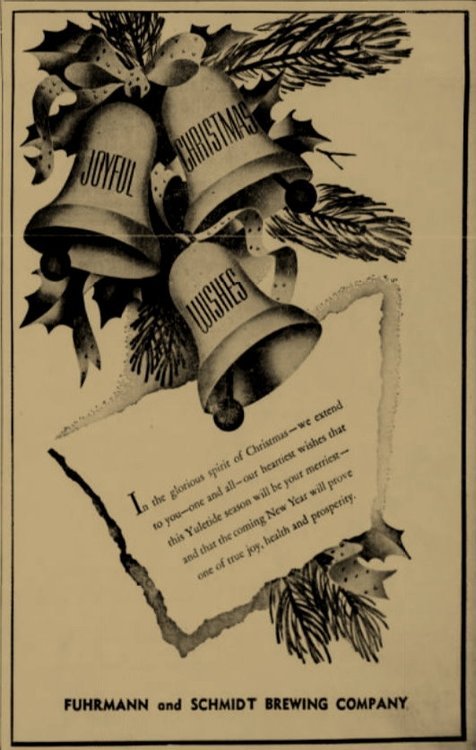 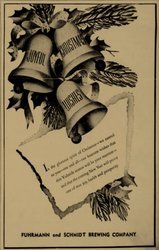 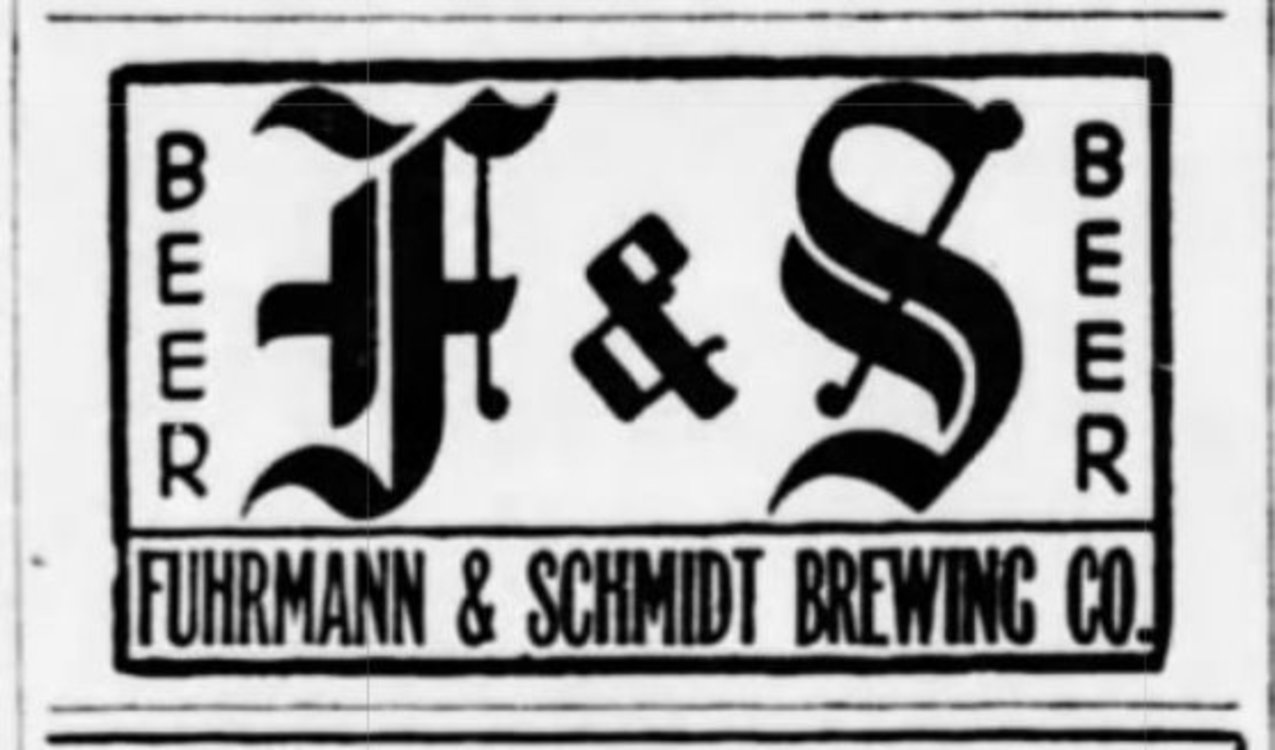 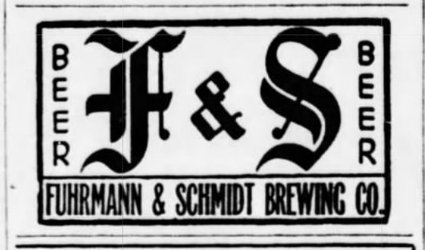 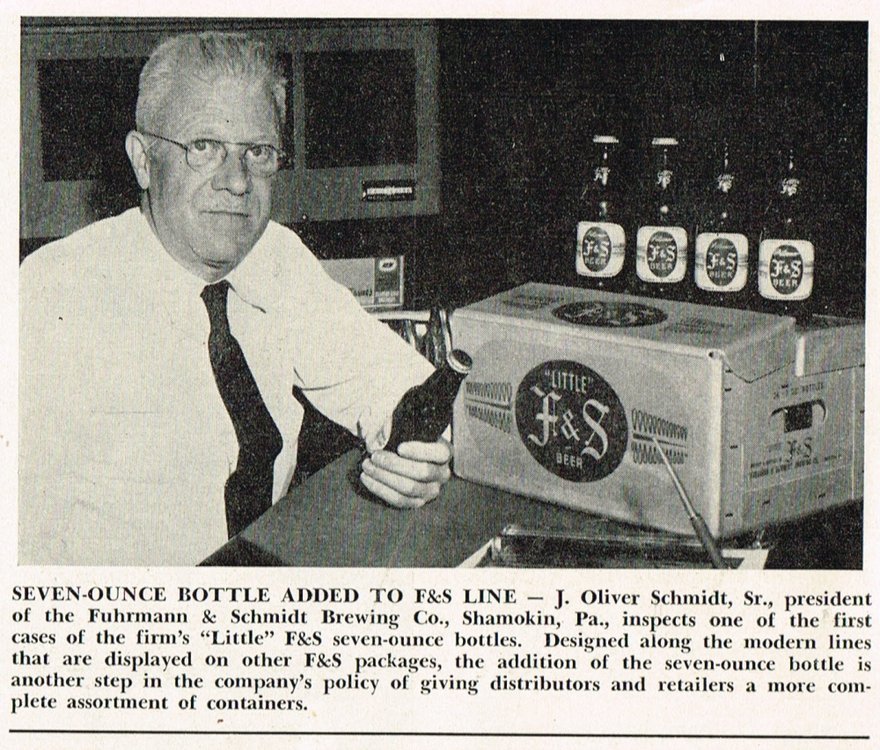 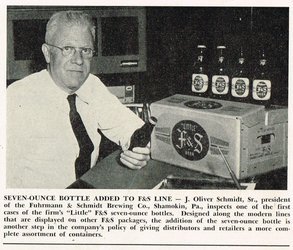 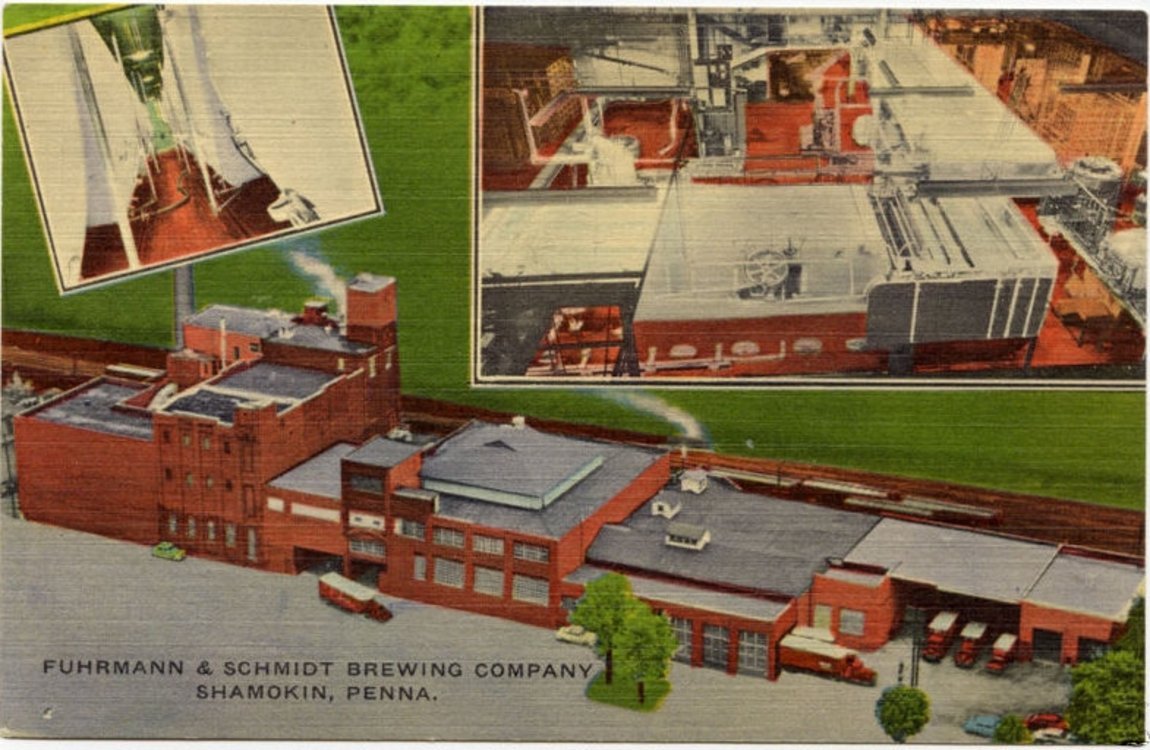 The Fuhrmann & Schmidt Brewing Co. in the mid 20th century. 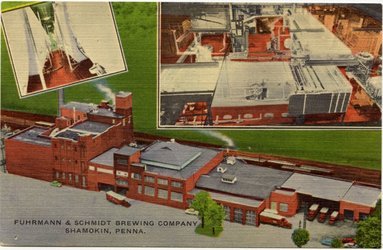